Bettylu Dennis has fond recollections of singing “Summertime” alongside Count Basie – one of her more memorable experiences as a touring singer during World War II.

“He was a great guy. In fact, he said, ‘You should get out of the Navy and join our band,’” Dennis says. “He was a gentleman.” The Gulfport Armed Forces Retirement Home resident was less impressed after meeting Frank Sinatra — not finding him personable or handsome.

“I told one of my friends I didn’t think he would amount to much,” says the 96-year-old veteran of the WAVES, the women’s branch of the U.S. Naval Reserve during World War II.

An Indiana native, Dennis belonged to a four-person singing group while she was in the service, which toured the country supporting the Navy’s recruiting efforts. She made her performing debut at age 7, when she sang in her first revue.

“The first night, several of the girls received beautiful bouquets, and I didn’t get one,” Dennis recalls. “The next night, my father came up on stage and gave me a beautiful bouquet of roses.”

Dennis’s father was a World War I Navy veteran and worked as a chief engineer inspector of naval materials. She watched many others from her generation answer the nation’s call — including her then-boyfriend, Stu — and felt compelled to join the war effort.

“WAVES were machinists, secretaries (and) worked in factories …,” Dennis says. “Wherever men were lacking, that’s where they put us.” 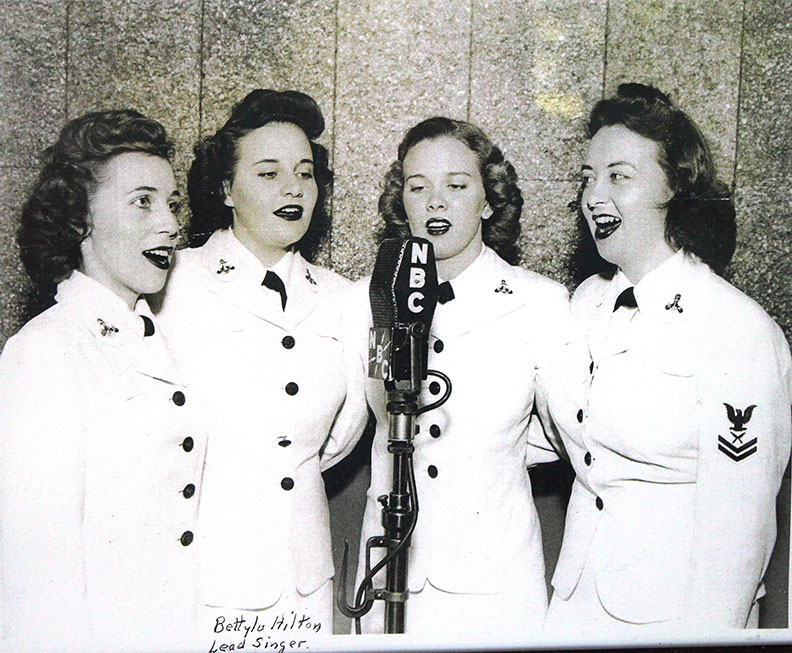 Once her vocal talents were discovered, Dennis was assigned to a singing group that included three other women and an orchestra. Following four or five weeks of rehearsal, she recalls, they took to the road and hit nearly every big city and military base in the Midwest.

“We traveled sometimes overnight so we could be at the next duty station or city where we had to perform,” Dennis says. “It mattered not what branch of service; we entertained all of them.”

The singer supported the Navy’s recruiting efforts for a year and three months and was sent to Bainbridge. Maryland, because they needed a vocalist. At one point during her singing career, Bing Crosby’s band director arranged a screen test for her, but Dennis never went — choosing to become engaged to Stu rather than pursue a Hollywood career.

“I have no regrets,” she says. “Who knows what would have happened if I’d have gone out there?”

Stu went on to join the FBI, and the couple had two sons — who gave them four grandchildren and six great-grandchildren. Dennis didn’t sing past the age of 54, due to thyroid and vocal cord issues. Although devastated, she got a set of clubs and took up golf.

“That’s my other claim to fame,” she says. “I’d still be playing if I could.”

Stu died in 1999, and Dennis moved into the Armed Services Retirement Home a few years later. She met resident Byron Dennis there, to whom she was married until his death in 2014.

“I’ve been very fortunate,” she says. “I had two men I loved who loved me.”

She posed as “Miss December” for the home’s philanthropic calendar project in 2012, helping raise over $20,000 for charity. Dennis also is among the founders of the home’s Mardi Gras Krewe of NAMAC – serving as its queen for 2019.

An avid Saints fan, Dennis has supported the team since its founding. A New Orleans resident at the time, she attended the team’s first game on Sept. 17, 1967. For over 20 years, she didn’t miss a match – even traveling for away games.

Although Dennis couldn’t get tickets for a Thanksgiving Day game, her friend, Cathy Collins, arranged for her to receive something even more special – a football signed by every player.

“I was thrilled. I wasn’t expecting it …,” she says. “It was a big deal for me. I don’t think anyone else in this facility has a football signed by all the Saints.”

At the Armed Services Retirement Home, Dennis says she is “in the right place” and couldn’t ask for better help. Reflecting on her life and experiences, she says she feels thankful for each day. “I’ve been blessed,” Dennis says. “Someone up there likes me.”